Home » The History of Unicorn

The story of Unicorn begins in the spring of 1969, when my dad was 20 years old and was getting ready to leave for Army Basic Training. Gene Crane Lincoln-Mercury in Ironton, OH had a brand new yellow Cougar Eliminator and a white with black vinyl top Q-Code non-Eliminator Cougar sitting on the lot. Mr. Crane had ordered these cars because he had a Cougar GT-E that he raced and eventually sold to a customer so he needed something to replace it. The Eliminator was Mr. Crane’s “demo” vehicle and at 60 miles on the odometer he spun a main bearing. The guys in the service department disassembled the engine and ordered a new crankshaft and bearings, unbeknownst to them they ordered the wrong shaft. When they reassembled the engine, it shook horribly. The engine disassembled for a second time to determine why. Their visual inspections didn’t turn up anything wrong. They reassembled the engine once more, started it and the same result. The car sat in one of the service bays for quite some time until a factory representative could come down to personally inspect why the engine shook terribly.

The factory rep determined they were using a 1UB part-coded (regular Cobra Jet) crank instead of a 1UA (Super) crank. Thankfully the mechanics didn’t throw away the original crank and by referencing that, that ordered the correct one. In August when the crank arrived the whole rotating assembly was sent out to be balanced. After the balancing there were no shaking issues. In December that year my dad came home from Army Advanced Individual Training and visited his friends at the dealership. He noticed that the car was sitting in the service bay again, and asked Mr. Crane why he hadn’t sold the car and the response was, “Well, everyone’s afraid of it because the engine’s been apart”. My dad asked how it ran and Mr. Crane offered a ride, so they went out behind the dealership on 2nd Street and “set the polyglas tires on fire”. My dad says it pinned him back in the seat. After the ride, my dad asked how much Mr. Crane would take for it. At the time my dad had a ’68 Montego MX 302-4V 4-Speed that he had purchased from the dealership a year and a half earlier and would use that as a trade-in. The deal was made on December 31st 1969 and below you can see a picture of “Unicorn” from that day.

When Springtime 1970 rolled around the car and my dad were at the drag strip, he couldn’t wait to get there. The best time he ran stock in G/SA was 13.11 on slicks. Roger Gustin of Gustin Brothers Racing and Jet Drag Racer fame was a close friend of my dad’s. Roger was sponsored by Ford at the time and had a SuperStock 429 Cyclone. After numerous discussions with Roger and the service and parts managers at the dealership came to the conclusion the car could do much better than low 13s. After hours of scouring the Muscle Parts publications from Ford, the conclusion that several 427 medium riser engine parts would significantly help the engine breathe better. These parts included: a dual-point distributor, aluminum medium riser intake and a 427 hydraulic cam. Head gaskets seemed to be a problem so Mr. Gasket ones were used in place of the factory ones. All of the valve springs were replaced with Isky ones due to valve float at max rpm. Finally a set of Jardine competition only headers which required the removal of the power steering system and portions of the shock tower braces with an acetylene torch.

With all these mods the car saw low 12s, but still wasn’t fast enough. That’s when 90/10 shocks were installed for better weight transfer. The stock fuel pump was replaced with an electric one, a cast iron timing chain and gear replaced the stock unit for more accurate timing and a good set of slicks. The length of the header collector was messed with to optimize exhaust flow and the final mod was changing the 3.91 trac-lok to a 4.30 Detroit locker out of a brand new ’70 cyclone. The need for speed obsession got so bad and as much as he would’ve hated to admit it back then, my dad called in a Chevy guy to re-jet the Holley carb. Finally after all the second of tweaks and mods, 11.70 was the dial-in number. The car was never beat by a single 396 or 454 GM product. The car never lost to a 383 or 426 Hemi Chrysler product either on the street or a drag strip. However, one pesky little 427 Camaro would give the car (and my dad) fits. Finally after many tries, my dad beat the car on the street but the last time my dad raced that car down the quarter mile the F-body won. It was so close neither knew who won until they got their time slips. It should be noted that the car was not undefeated completely, as cars set up specifically for racing would beat Unicorn, but mostly stock cars were not much of a problem. One night a friend that had a BOSS 302 Mustang that the Rod Shop out of Columbus, OH had worked on beating Unicorn and won the class, but yet it went on to race a hemi charger that night and handily defeated it.

The last time the car was drag raced it was in the E.T. bracket and my dad won all the money given for that event. The Camaro guy was the one who talked him into doing it. By late 1972, the car had approximately 19,000 miles on it, mostly in half mile increments (down and back). My dad was helping Roger get a sponsorship with a ProStock Maverick and this became one of the main reasons for trading in the car. He traded it back to the local Ford dealer for a Gran Torino Sport which a friend of his promptly bought it the same day. The guy took the car out to California and the last my dad heard of the guy (and the car), the bank that held the title to the car was looking for him to repossess the car. Fast forward to June of 2002….when the car was found in the hands of a very gracious caretaker. Check out The Restoration for the rest of the story!

Here are the only three pictures in existence of the car in it’s “original” state. 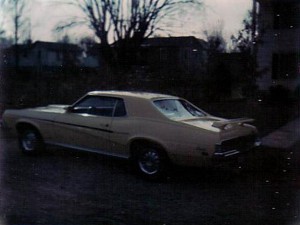 As Unicorn appeared the day my dad bought the car home, December 31st 1969 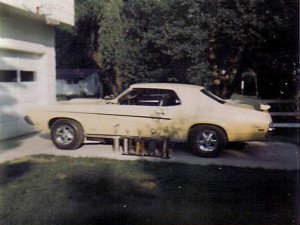 Spring 1970 at the dragstrip brought a few trophies 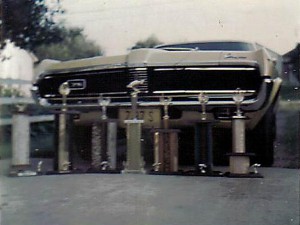 End of the season, quite a haul!

304 of them had Automatic Transmissions. Of them,

162 were equipped with the Eliminator Package.

61 of those were Bright Yellow and

53 of them had Black Hi-Back Bucket Seats, of which

17 were ordered with Super Cobra Jet Engines. Of those,

3 were equipped with Hood Pins. Of them,

1 had Clear Glass…..Mine is that Cougar.